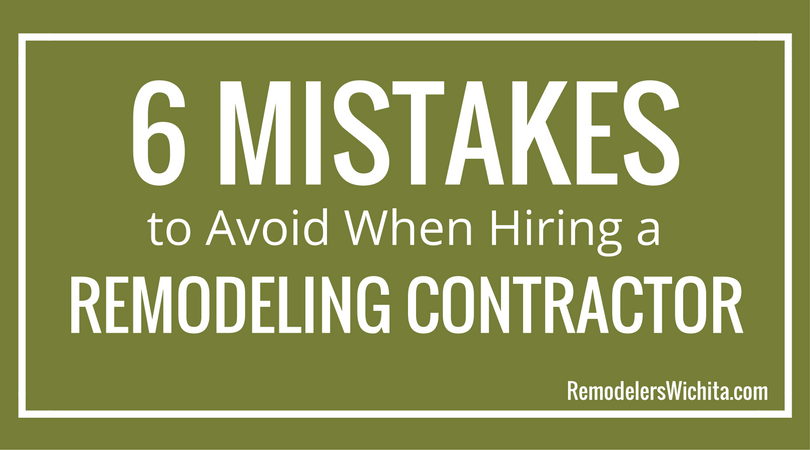 Hiring a home remodeling contractor is not a small decision. There’s a lot to think about, from the specific project being considered, to its budget, the desired outcome and much more. That also means that there are a lot of mistakes that could be made along the way. Here’s what to avoid and how to steer clear of trouble when hiring a remodeling contractor in Wichita.

Always take the time to check out a contractor’s references, not to mention online reviews and ratings, examples of previously completed jobs, and all the rest. It’s easy to find out how highly regarded any company or person is these days, so don’t overlook this step and find out later that he or she was all fluff with no substance or proven track record.

2) The Right Person for the Wrong Job:

One remodeling contractor might be the perfect company for building a new deck; but that doesn’t mean they’re the bathroom remodeling experts, though. Many homeowners stick with one contractor for every project, when their level of skill and experience doesn’t always apply evenly across the board.

3) Being Unclear About the Project:

One of the best ways to come away happy with the way a remodeling project has been completed is by being very precise and clear about the intended end result. This means not just saying the project is for an “upgraded” kitchen, but hashing out the exact goals of the project so there is no misinterpretation.

4) Being Unclear About the Budget:

Budgets can often be interpreted in different ways, especially when they’re left vague. Get that final estimate hashed out in as much detail as possible. Does it include all permits and licenses? The cost of hiring subcontractors? Materials? Be clear about what the budget actually includes, and then mentally add 10% onto that final figure to give a more realistic projection.

5) Being Unclear About the Timeline:

How long is it going to realistically take to complete the project? What hours of the day, and days of the week, are workers in the home? Be sure to talk to the contractor about this ahead of time so it’s not a surprise when months into the project there’s still a hole in the wall and a kitchen that can’t be used.

It’s a great feeling to trust a person at his or her word, and confidently shake on a deal. But when tens of thousands of dollars, or more, is on the line, not to mention a home that may be lived in for decades, all the specifics should be put into a written contract and signed.

Put the above to good use and much of the hassle and aggravation of home remodeling can be avoided. A little upfront legwork in terms of finding the right contractor to get the job done saves a whole mess of trouble down the road, and will help any homeowner walk away happier at the end of a remodel.

Download the Free E-Book ‘Ultimate Home Remodel Checklist’
Have Gmail?Leave a Google Review
No Gmail?Send Us Your Feedback

Get to Know Us!